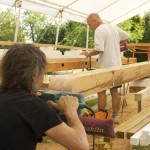 Quite a bit has been done since my last working party report. This month, work concentrated on preparing the second whip to make it ready to join its partner.

Once that’s done, the mortices need to be cut. Each is at a different angle 3° to 17.5°!! They have to be a increasing angles so as to give the shape and to catch the wind. It turns out that the angles for the Fulbourn windmill are unusual. Generally the Cambridgeshire tradition is to use angles of between 15° to 26°. Ours is quite a bit shallower.

You can see the morticing machine that was going to be used to cut out the main part of the mortice. The fine work is then all done by hand. 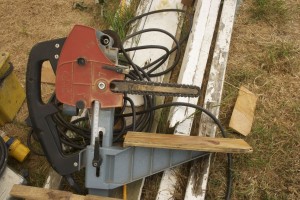 Meanwhile, work is progressing on the fan tail too. The fan tail stocks (or “fly stocks” as they were traditionally called–in fact the fan tail used to be known as a fly) have been painted on the inside (as shown) and now need painting in the outside. We’ll paint them black to give a nice contrast.

Thanks very much to the new volunteers that came. If you’re interested in volunteering, then register your interest here and we’ll be in touch. 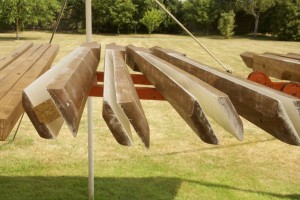 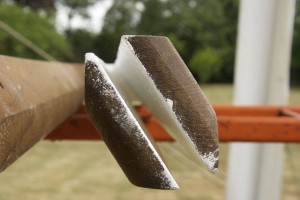